One of the final events of the Four Corners Festival was a discussion on what was described as the psychogeography of the city of Belfast.

A panel of four — with one connected via a video call — ruminated on their walking through the streets, along borders and through them, sharing their perspectives to an audience of about two dozen gathered at the freshly opened Girdwood Community Hub.

The question to answer was what can we learn about a city by listening to our feet.

The festival organisers, Reverend Steve Scottman, explained in his brief introduction that the idea behind this topic and venue selection — not yet visible on Google Maps — was to get us into places that we haven’t been to.

Susan Mansfield, who chaired the discussion, provided a brief history of wandering, from Baudelaire, to Thomas de Quincey, William Blake, and Charles Dickens.

For example, Walter Benjamin describes the wanderer as a product of the modern city. Contemporarily, think of the individual consuming their latte at a Starbucks, watching the world go by. That world is of people on their own journeys in an urban landscape created by other people.

In this spirit, Susan reviewed her preparations in organising the Belfast Passion Walk: “I walked a lot.”

In her walking, she observed that there was not much green space in the city centre, in contrast to others, like Edinburgh.

Also, in Belfast when one turns a street corner, you can suddenly enter new territory, visibly marked with painted kerbstones, murals, flags.

Garrett Carr, the next speaker, explored our North-South border, wanting to express it by what’s not on standard maps.

He described his walking journey along that line: “I got on the line and stayed on the line, until I lost my mind!”

Garrett produced his self-made map, his personal cartography, with elaborate key legend of the historical and contemporary markings, such as fortifications and official border crossings.

He also introduced us to the project, Mapping Alternative Ulster, an exhibition of the work of artists, urban planners and architects.

I particularly like the Vicinity Map, which shows the outline of a foot journey taken as close as possible to a one-mile radius of Belfast city centre.

Look out for the next exhibition showing in Armagh latter this year.

I pointed out how our man made structures affect our emotions, good and bad.

For example, the erection of the Berlin Wall separated a people — some died trying to traverse it — yet I managed to celebrate on top of it, with thousands of others, with the collapsing of Soviet communism.

The bridge in Mitrovica has links Kosovar Albanians and Kosovar Serbs. But recent acrimony resulting in blockages put in place on the bridge itself.

While in Derry-Londonderry, we are celebrating the new Peace Bridge in encouraging easy movement of people from its Cityside and Waterside sections.

In Belfast, Cupar Way has a curious fascination with tourists, with sightseeing double-decker bus tours purposefully stopping by.

To be sure, our conflict affected our architecture, with places like 6 Castle Place built to withstand bomb blasts, sandwiched between historic Victorian and more recent glass buildings — how what we build reflects the tastes and priorities of the day.

My review of the Sandy Row Tour ended at its final stop, the Belfast Wheel. I observed that many in the city refer to it by the section they live in, not by the name Belfast itself. Yet creatively, the pieces do come together to form a whole.

But this relates to the reimaging in our heads.

For as I argued in my retracing of steps of last year’s Passion Walk, when Jesus looked back on the city of Jerusalem, wanting to bring all under his wings with passion and love, he observed that they are not willing.

Thus, the challenge is whether we have the willingness to accept compassion to overcome our divisions, and at least unite the city of Belfast.

Kate Trenerry had her presentation relayed by Susan, while connected by a live link. Kate is creator of a project, Walking Walls, which compares and contrasts her experiences walking along security borders in Belfast, Israel/Palestine, and Nicosia.

She queried why we walk, suggesting: (1) immersion; (2) challenge; and (3) openness (walking is a human scale activity).

In her wanderings through Belfast, she observed how painted it is, including bollards and gated entries.

Her response was, “Everyone wants to claim space, but you might paint yourself into a corner.”

Kate concluded that walls are secondary, for bad (internalising one’s community) and good (in Belfast they are easy to walk around), and that walking has the potential to clear one’s heart.

The question and answer session further explored what walking means to us, for example whether it’s more rewarding when done with others, or as a form of individual pilgrimage.

When we panellists were asked how the architecture of Girdwood Community Hub spoke to us, I replied that it reflected our current society — the promise of this building bringing people together, yet you could look out any of the four sides to be reminded clearly of the issues of legacy that we still need to deal with.

We concluded with a trailer for this year’s Belfast Passion Walk, which I encourage you to do. It is sure to have you look at our streets in a new light! 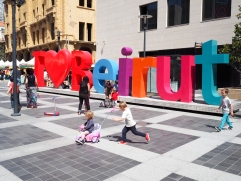 Roadside sign with instructions for cross the Mitrovica Bridge, looking towards the southern side of the city. People approaching each other, heading in opposite direction. Mitrovica, Kosovo. 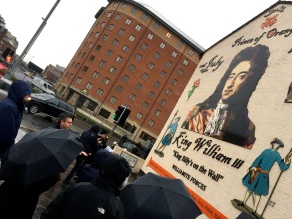