Released in hardcover in August 2018 and now available in paperback, The Colour of Time, by historian Dan Jones and artist Marina Amaral, is a collection of 200 colourised photographs taken between 1850 and 1960. With accompanying extended captions, this is a visually rewarding overview of personalities and major moments in world history, from the Crimean War to the space age.

There is a statue of Queen Victoria in the grounds at the front of Belfast City Hall. While many may be familiar with seeing photographic images of her in her later life, in 1854 a series of portraits was commissioned by her husband, Prince Albert. Aged 35, Queen Victoria had already worn the crown for half her life. Of the image above, the Queen noted in her diary that she “was very successfully photographed, but it took a long time”.

Built in Belfast, the RMS Titanic sank on her maiden voyage to New York City, on 14 April 1912. There were 1,316 passengers and nearly 1,000 crew; 705 survived. This image shows newsboy Ned Parfett selling the Evening News outside the London office of the White Star Line shipping company, which was cleared of negligence in two official inquiries. Parfett, as a British soldier, was killed in France in 1918.

The Battle of the Somme was a five-month clash along a 24km front. On the first day, 1 July 1916, the British Army lost nearly 60,000 men. The 36th (Ulster) Division was the only division of the British corps to achieve the objectives of the opening day; it captured a long section of the German front. Shells tore the woods of the Somme Valley to ribbons, which this image shows. By the end of this battle, some 600,000 were killed or wounded on the Allied side, including 5,500 from the Ulster Division. 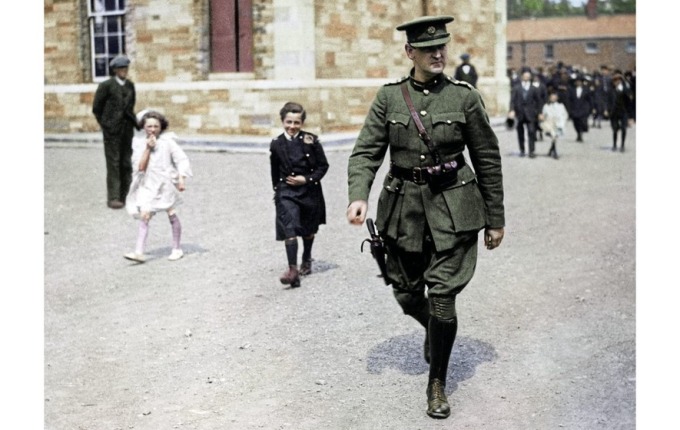 A rebellion for Irish independence also took place in 1916. After the First World War, the Irish Repubican Army found guerilla battles with the British Army, the Royal Irish Constabulary, and other auxiliaries. This ended with the 1921 Anglo-Irish Treaty. Michael Collins, a key architect of the treaty, took on the military command of the new Irish Free State, which is shown in this image. He was assassinated 15 days after this photo was taken.

During the Second World War, Hitler used air assaults, which targeted civilian and industrial locations in London, Hull, Liverpool, and Glasgow. It is remiss of the authors not to cite Belfast, where 1,000 were killed by Blitz raids. This image is a staged photograph, to emphasise the plight of children during the bombing campaign.

We have become familiar with the annual Christmas message delivered by Queen Elizabeth II. This image shows her first Christmas broadcast, by radio on 25 December 1952, from the Sandringham estate in Norfolk. This tradition began by her grandfather George V, in 1932. 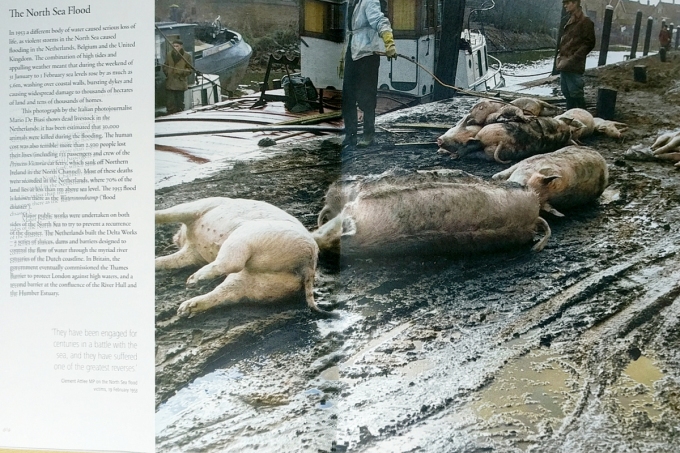 In February 1953, violent storms in the North Sea caused flooding in the Netherlands, Belgium, and the United Kingdom. During the weekend of 31 January to 1 February, sea levels rose by as much as 5.6m, causing widespread damage. An estimated 30,000 animals were killed by the flooding, which this image depicts. More than 2,500 people died, including 133 passengers and crew of the Princess Victoria car ferry, which sank off Northern Ireland in the North Channel. The wreckage lies five miles from the Copeland Islands.

The European Coal and Steel Community (ECSC) was a supranational economic treaty created in the aftermath of the Second World War. This 1957 image shows a reception in Luxembourg being addressed by René Mayer, a senior ECSC official. The ECSC was the precursor to the European Economic Community and, in turn, the European Union.

This selection of colourised images from world history shows how local and global events are interdependent — we affect and are affected by movements of history. This set represents epochs of colonial empire, rebellion, world wars, natural catastrophes, and international cooperation. What images will capture the essence of our future history, say, of man-made disasters and retrenchment?